Shine some solar in Gaza

Some solar entrepreneurs in Israel have decided to shine some light in Africa, Haiti, Romania and a dozen other countries.   Yosef Abramowitz says his Arava Power Company, which established Israel’s largest solar field to generate electricity, plans to deploy $20 billion by 2020 to build 10,000 megawatts and supply green energy to 50 million people.”

The company now has a 4.9-megawatt field up and running, nine fields under construction, and plans for forty more energy projects in Israel over the next three years, including the first solar field on Bedouin land. Their goal is to eventually supply one tenth of Israel’s power.

Abramowitz has been dubbed Captain Sunshine and three times nominated for a Nobel Prize.

The inauguration of Israel’s first solar field, at a kibbutz in the Negev desert, on June 5, 2011. (photo: Matthew Bell)

What about the Gaza Strip, probably just miles from his kibbutz in the Negev desert?   Nearly 1.7 million Palestinians are sitting in the dark several hours every day without electricity.

Generators sitting on the sidewalks with extension cords running into the business.  A very common sight in Gaza.

Schools, hospitals and businesses rely on diesel-burning generators when the power goes off, obnoxiously loud and polluting.  Children do their homework by candlelight.  People are dying when burning candles set fires in the houses.

Battery-powered lanterns found in many homes.

In June 2006, Israel destroyed Gaza’s power plant in retaliation for the kidnapping of Cpl. Gilad Shalit.  Power has never been completely restored.

The current capacity for electricity supply in the Gaza Strip is 242 MW (as of summer 2011). 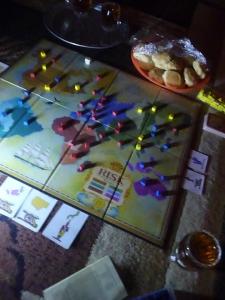 We played a game of Risk sitting in the dark.

Gaza has plenty of sun.  I know, I saw it.  Shouldn’t Israel (as the occupying power) be helping Gaza become energy independent?  In fact, Richard Falk, the UN Special Rapporteur, made that very recommendation in his report to the UN Human Rights Council on June 10, 2013, available here.

This is very frustrating.  A feasible solution to a serious problem could be deployed in a very short time, but Israeli officials aren’t talking about it, and the private sector in Israel appears more interested in helping with humanitarian efforts in Africa.