Shooting fish in a barrel

Life is unbearable in Gaza. It’s been unlivable for years for the 2+ million Palestinians trapped there, but now it’s at the breaking point. Many (most?) feel there’s nothing to lose by going to the eastern border and facing down the Israeli marksmen who are shooting them like fish in a barrel. Today 55+ Palestinians have been killed (including a journalist, a medic and a Palestinian with no legs) and hundreds wounded for demanding their rights enshrined in United Nations Resolution 194.

Less than 100 miles away in Jerusalem, Netanyahu and others are in a celebratory mood as the U.S. flag is raised over the new U.S. Embassy. They don’t even acknowledge the slaughter occurring in Gaza.

I’ve called my two U.S. Senators (Udall and Heinrich) and Congresswoman Lujan-Grisham, demanding that they condemn the slaughter of innocent, unarmed Palestinians. I want them to join the other members of Congress who have spoken out against the killing and maiming of unarmed protesters, including: Senators Feinstein, Warren, Leahy and Sanders; as well as the following House members:

My eyes are now focused on Udall, Heinrich and Lujan-Grisham.  I’m going to hound them until they come clean with a statement condemning Israel’s slaughter of innocents.

Senators should not build unity on the backs of Palestinians

When do U.S. Senators stand lockstep together?

When the American Israel Public Affairs Committee (AIPAC) convinces them that the United Nations is biased against the State of Israel.

It’s rare, especially these days, for all 100 U.S. Senators—from Bernie Sanders to Ted Cruz, from Elizabeth Warren to Mitch McConnell—to agree on something. But the scourge of anti-Israel bias at the United Nations is such an issue.

So all of them, including Senators Warren, Sanders, and my two Senators from New Mexico signed on to the letter undoubtedly written by AIPAC, the pro-Israeli lobbying operation ensconced in Washington DC.

The letter is a warning note to Secretary-General Guterres – “reform your agencies from within or pay the consequences.”

Although, as Republicans and Democrats, we disagree on many issues, we are united in our desire to see the United Nations improve its treatment of Israel and to eliminate anti-Semitism in all its forms.

My response sent to my two U.S. Senators follows.  I hope they hear from many other constituents.

I’m very disappointed with your signatures on the letter (likely drafted by AIPAC) to the United Nations regarding Israel.

You, along with your colleagues in the Senate, have adopted Israel’s strategy of deflecting legitimate and worldwide criticism of Israel’s brutal 50-year occupation by focusing criticism on the messenger, the United Nations. We’ve all seen this same “strategy of deflection” coming from the White House in the form of childish Tweets. Your letter is just as childish.

Threatening the United Nations and demanding internal “reforms,” based on false assertions that the U.N. is unfairly targeting Israel, belies the fact that the community of nations stand together in their condemnation of Israel’s long-term, illegal occupation of Palestine.

A quick online review of recent actions in the United Nations reveals that the U.S. stands alone with the Marshall Islands, Federated States of Micronesia, Nauru, Palau (and sometimes Canada) in supporting Israel in the U.N. General Assembly. Every other nation is united in speaking the truth about Israel’s continuing violations of international humanitarian law and the law of occupation. Your letter’s bullying demands to the Secretary-General reflect poorly on the United States, but it’s certainly a testament to AIPAC’s power over the U.S. Senate.

I particularly want to draw your attention to the letter’s outrageous claim about “UNRWA’s troubling anti-Israel bias and activities.” You write that “UNRWA must pursue reforms or risk significant consequences.” I’m personally familiar with UNRWA’s solid work in the Gaza Strip and I find this characterization and threat totally unacceptable. The Senate’s blind loyalty to Israel’s hasbara must end.

I’m also astonished that you oppose the international call for Boycott, Divestment and Sanctions (BDS) as stated in the letter to the U.N.  Peaceful, nonviolent methods to end Israel’s occupation deserve your strong support, not condemnation.

Please learn the facts about the occupation, beginning with the fact that the Gaza Strip will be unlivable by 2020.

Israel’s leaders have proven over many decades that they are incapable or unwilling to end the occupation. If the United States cannot play a constructive role, then please support the United Nations and its constituent agencies in the work they are doing in the Middle East.

Finally, I invite you and your staff to join me in UNRWA-USA’s 5K run in Washington, DC in September.  Your support for this worthy cause would be greatly appreciated. 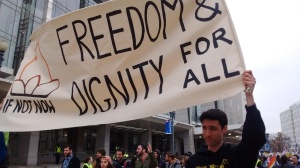 This week, a bipartisan group of 88 US Senators signed a letter to Obama expressing their concern about Palestine’s new unity government.  Check out the letter here.

“The recent formation of a Palestinian Authority unity government supported by Hamas, a designated Foreign Terrorist Organization that has never publicly accepted the Quartet principles, represents a serious setback to efforts to achieve peace,”the Senators wrote. “By its actions and inaction, Hamas has demonstrated it is not a partner for peace.”

The letter conforms to AIPAC’s position on the unity government (see here and here) and was undoubtedly drafted and circulated by AIPAC for Senators’ signatures.  I wish I could have been a fly on the wall when those discussions occurred between AIPAC lobbyists and my two US Senators, Tom Udall and Martin Heinrich. I’m very disappointed that they signed.

The Palestinian unity government (Fatah in the West Bank and Hamas in Gaza) threatens Israel’s strategy to divide and conquer the Palestinians.

Israel wants to divide Palestinian Christians from Palestinian Muslims. Why? Israel wants to frame the conflict as Muslims vs. Jews, rather than the occupation of Palestine. “Occupation” has legal consequences; a religious conflict sounds righteous.

Israel wants to divide Palestinian communities in the West Bank from each other. Why? Israel prefers many disconnected bantustans in the West Bank, divided by Israel settlements, so there will never be a viable State of Palestine.

My government is complicit in this “divide and conquer” strategy as evidenced by its support for the suffocating 7-year siege of the Gaza Strip.

Either my U.S. Senators don’t understand the complexity of the ‘divide and conquer’ strategy, or they believe their chances of reelection might be endangered if they don’t follow AIPAC’s wishes, or they sincerely believe that Hamas is a foreign terrorist organization which threatens US interests in the Middle East.

By now, the book I ordered for you should have arrived at your office – GAZA WRITES BACK, Short Stories from Young Writers in Gaza, Palestine, Just World Books, 2013.

Despite your busy schedule of meetings, briefings, and committee hearings, you would be wise to put this book on the top of your pile.

I know you pride yourself in being prepared, doing your homework, and thoughtfully examining issues from all sides before forming your position. I commend you for your diligence.

On the matter of the Middle East, and specifically the Israel-Palestine conflict, Israel obviously has a distorted influence and the power of persuasion over many members of Congress through its well-greased lobbying campaign waged by the American Israel Public Affairs Committee, otherwise known as AIPAC. I wonder how many times you’ve met with AIPAC lobbyists.  Wish I could be a fly on the wall during those meetings.

Do other countries deploy such influential lobbyists in the halls of Congress?  I doubt it.  Certainly, the Palestinians don’t have the resources or the political acumen to compete with the AIPAC minions.

That’s why GAZA WRITES BACK is crucial to your education.

Undoubtedly, much of what you’ve learned about Palestine comes through the distorted lens of AIPAC, the Israeli government, perhaps a Zionist organization spewing well-tested hasbara, or the unquestioning mainstream media.

Have you ever spoken with a Palestinian?

Palestinians are certainly neither monolithic in thought nor unified in their political opinions, just like Americans, but the most relevant voices for the future are those of the Palestinian youth who are well-educated, intellectually curious, and possess wisdom well beyond their years.

GAZA WRITES BACK includes 23 short stories written by young adults from Gaza, most have never left this tiny enclave because of the suffocating Israeli siege. Their stories are written in English, not translated from Arabic, and tell about the ordinary and extraordinary events of life under Occupation.

Israeli leaders have waged a very deliberate campaign since the State of Israel was founded in 1948 to erase the history and memories of the indigenous Palestinians from popular discourse, just as they erased hundreds of Palestinian villages in a matter of months. They have carefully framed the conflict to divert the world’s attention away from the Occupation – you will never hear AIPAC lobbyists speak about the Occupation.

Since the US government is funding Israel’s brutal Occupation – to the tune of over $3 billion each year – you should know what Americans are getting for this investment. AIPAC will tell you “security” but, if you read between the lines, these young Palestinian writers will make you think twice about the impact of American foreign policy in the Middle East.

In their own words, with the clarity of uncensored feelings and dreams, these Palestinians eschewed rockets and stones, and decided to pick up their pens to call for justice. Read their stories. Feel their stories. And then lets talk.

I’ve attended a couple of events in your home state of New Mexico this week where your name came up in the discussion.  Are your ears burning?

In the first event – a gathering of about 20 people in someone’s home – I was told that you might have a sympathetic ear for the plight of the Kurds in northern Iraq, but people rolled their eyes when the Palestinians were mentioned. They said “forget it.” One person said she got into a verbal sparring match with you in the parking lot of the local food coop about Israel/Palestine.

Your name came up again at a gathering of about 50-75 people at the launch of the local chapter of the Jewish Voice for Peace. Several people remarked about how disappointed they are with your positions about Israel/Palestine and that you’re unapproachable and unwilling to hear a viewpoint that contradicts AIPAC‘s drool.

I’m disappointed – very disappointed – to hear this feedback. You and I haven’t talked about Palestine since you moved from your House seat to the Senate, but I was hoping to make a date to stop by and chat the next time I’m in D.C.  Would you have an open mind or has AIPAC hardened your thinking about the Middle East?

Your position on airstrikes in Syria in September makes me think you don’t have the backbone to stand up to AIPAC lobbyists and your pro-Israel constituents back home.  But here’s a little secret. 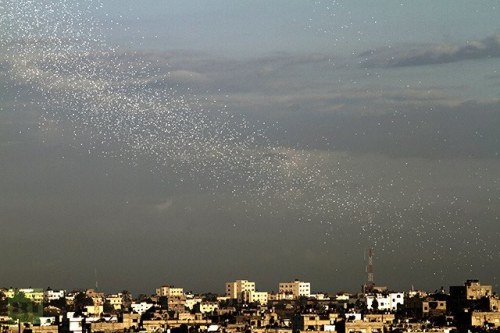 This picture was taken on November 15th, 2012 during the 8 days war over Gaza. It shows the warning leaflets dropped by Israel over Gaza with a road map telling people to leave their homes.

Tonight I saw the beginning of a parade in Albuquerque.

This parade has been marching in many communities around the country, people of many faiths and different traditions, old and young, and every color under the sun. These people are coming together to work for peace, social justice, equality, and human rights.  And Palestine is at the top of their agenda.

Now you’re going to see the parade in Albuquerque, beginning with billboards around the city calling for support of federal funding for Albuquerque, not Israel’s occupation of Palestine. One of these billboards is just down the street from my house.  And they’ve started a petition drive to tell the Albuquerque City Council that they should tell the federal government to stop aid to Israel until that country abides by international law. I just signed the petition here. 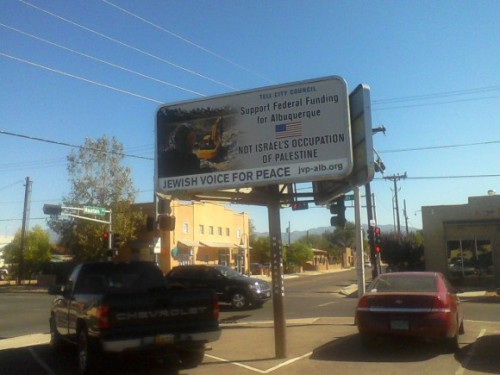 Senator Heinrich: You’d better watch this parade carefully because I bet you’ll be running to catch up and lead this parade one day soon. Politicians are like that.  Just watch.