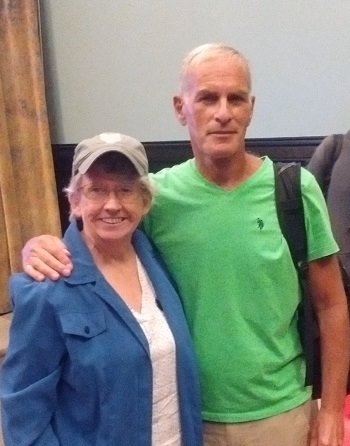 Finkelstein and Lora in NYC (August 2017)

I first met Professor Norman Finkelstein in Albuquerque in 2012 when he spoke to a friendly audience about his book “This Time We Went Too Far: Truth & Consequences of the Gaza Invasion” about Operation Cast Lead. Several years later, I was serendipitously in the right place at the right time, and attended a course he taught over several weeks at the New York City public library dissecting John Stuart Mill’s classic ON LIBERTY. Finkelstein is a controversial figure in the best sense of the word. He thoroughly reads and researches before he expounds on a topic, and then he speaks his mind clearly and without reservation for the political correctness or sensibilities of his audience.

Norman  Finkelstein received his doctorate in political theory in 1988 from the Princeton University Politics Department. He taught for two decades in the CUNY system, NYU and DePaul University (in Chicago). He has lectured on a broad range of subjects, and has written ten books that have been translated into more than 50 foreign editions. Finkelstein’s main fields of research and teaching are political theory, international law, and the Israel-Palestine conflict.

On February 14, 2021, Finkelstein was asked his opinion about the recent ruling of the International Criminal Court (ICC). The ICC concluded it had jurisdiction over the Palestinian occupied territories to investigate potential war crimes from Israel’s attack on Gaza in 2014 as well as the 2018 Gaza border protests where Israeli sharpshooters maimed or killed hundreds of unarmed Palestinian protestors. Many of us have been waiting for the court’s decision for years.

The mainstream media (including the United Nations) has framed the ICC’s recent ruling as “good news” for the Palestinians. I must admit that I’ve been on cloud 9 since reading this news, thinking that perhaps there would finally be a measure of justice for the Palestinians, as well as elevating the credibility of international law and of the ICC itself.

Unfortunately, I failed to read the opinion (or even digest the entire announcement made by the ICC on February 5, 2021). Although the ICC concluded it does have jurisdiction in Palestine, it went on to say:

In addition, the Chamber found, by majority, that the arguments regarding the Oslo Agreements, and its clauses limiting the scope of Palestinian jurisdiction, are not pertinent to the resolution of the issue of the Court’s territorial jurisdiction in Palestine. Such matters and other further questions on jurisdiction may be examined when and if the Prosecutor submits an application for the issuance of a warrant of arrest or summons to appear.

In this interview, Professor Finkelstein dissects the ICC’s opinion better than many who are well-versed in the intricacies of international law in the context of Israel-Palestine. Every Palestine solidarity activist would be wise to spend the next hour listening to his explanation. Without giving the punch-line away, I’ll just say that the Palestine Authority shot itself in the foot when it responded to the ICC’s query regarding the Oslo Accords.

2 responses to “Finkelstein dissects the ICC ruling about Palestine”