Friday, March 30th is either the launch of a peaceful march to the border area between Gaza and Israel — or it’s “highly explosive” and “threatens to damage the sensitive life fabric and safety of the region’s residents.” 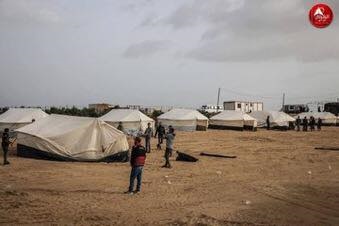 Palestinians are erecting large white tents near the border, anticipating families and the elderly joining the activities planned over the next six weeks.

Israel is  deploying more than 100 sharpshooters to the border with permission to open fire if lives are in jeopardy. They’re also talking about air-dropping food and medicines into the heart of Gaza from airplanes or drones to lure Palestinians away from the border.

The Palestinians are dancing their traditional dance, dakbe, waving flags, and flying kites near the border. The Israeli Army is closing down the West Bank and Gaza for nine days during Passover as the military “braces for Gaza border riots and West Bank unrest.” Israel is calling and texting the bus companies in Gaza, warning them not to transport people to the border, and threatening them with punitive actions.

Dancing the traditional Palestinian Dakbe at the border.

Israel has set in motion its well-greased hasbara machine ahead of the #GreatReturnMarch.

Israel’s Foreign Ministry reached out to the international community on Twitter Thursday in anticipation of violent clashes between Israeli troops and Palestinian protesters along the Gaza border in the coming days.

“While the campaign is being presented to the world at large as a peaceful enterprise, there is no doubt that this latest Hamas ploy is aimed at igniting a violent confrontation with Israel,” the Foreign Ministry’s statement began.

Israel wants to remind you [the international community] that there’s a “good” guy and “bad” guy here —- one defending itself and the other, well the other is trying to survive a brutal occupation. Israeli diplomats have contacted the U.N. and their colleagues around the world to prep them with demonstrably false information — that Hamas (the terrorist organization) is organizing this event, paying Palestinians to show up, with subversive intention to breach the border fence and “infiltrate” into Israel. Israel will hold Hamas responsible if there are casualties at the border.

A Palestinian scholar from Gaza writes: “The Great March of Return (of Gaza) is a grassroots movement initiated by Palestinian organizers, activists, and intellectuals, and is the product of years of conversations in Gaza about a way out of its misery. Attempts by Israeli media and government to portray tomorrow’s march as something instigated by Hamas is not only false, but also part of an old approach that reduces Palestinian agency to conspiracies and portrays Palestinians as pawns for factions and governments.” Check out their Facebook page here and their Twitter account here.

The goal of the #GreatReturnMarch as shared by the organizers:

The march will for the first time, employ the popular dimension to effectively compel the Israeli occupation state to the international resolutions and recommendations that it denies and refuses to implement, which over the past decades has constituted a clear threat to international peace and security.

#GreatReturnMarch is a cumulative, civil, peaceful sit-in calling for the implementation of right of return for Palestine refugees

One response to “Preparations for the #GreatReturnMarch”