Many Americans know that the United Nations called for the creation of the State of Israel following a U.N. vote A/Res/181(II) in November 1947.

Some Americans may be aware that the actual founding of the State of Israel occurred on May 14, 1948 in Tel Aviv when David Ben Gurion stood up before the Jewish People’s Council gathered at the Tel Aviv Museum and read a declaration. 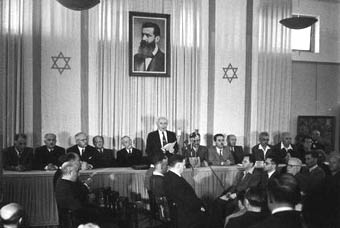 I bet few Americans have a clue that under international law, and Resolution A/Res//194 (III) (adopted by the United Nations General Assembly on December 11, 1948)  the Palestinian refugees have the right to return to their properties, homes and businesses in what is present-day Israel.

Resolves that the refugees wishing to return to their homes and live at peace with their neighbours should be permitted to do so at the earliest practicable date, and that compensation should be paid for the property of those choosing not to return and for loss of or damage to property which, under principles of international law or in equity, should be made good by the Governments or authorities responsible;

Haaretz columnist Uri Avnery claims the Palestinian right of return is not such a complicated issue, (Oct. 18, 2017 article) but nothing strikes dread into the hearts of Israeli leaders (and perhaps many Israelis) more than the thought of millions of Palestinians pouring across Israel’s undefined borders. The demographics challenge, they fear, would be insurmountable for their Jewish state. Israel now wants Trump to remove the ‘right of return’ from the negotiating table. (January 2018 article).

The Palestinians are planning to put the ‘right of return’ front and center — on every dining room table in Israel, every board room in executive suites, and in the heart of the Knesset. 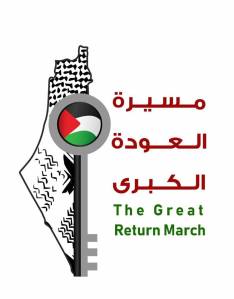 They are asking the international community to cooperate with them and the expected participants to ensure the realization of the right to return for the Palestinian people as an inalienable, indivisible right in accordance with the rules of law, labor, justice and international jurisprudence.

The “Great Return march” is a popular Palestinian peaceful march, where the participants (men, women, children, elders, families) will start marching from the Palestinian communities in the occupied territories (Gaza Strip, the West Bank and Jerusalem) and from (Jordan, Lebanon, Syria and Egypt) to their homes from which they were forcibly displaced in 1948.

From the Coordination Committee:

In other words, the march will for the first time, employ the popular dimension to effectively compel the Israeli occupation state to the international resolutions and recommendations that it denies and refuses to implement, which over the past decades has constituted a clear threat to international peace and security. 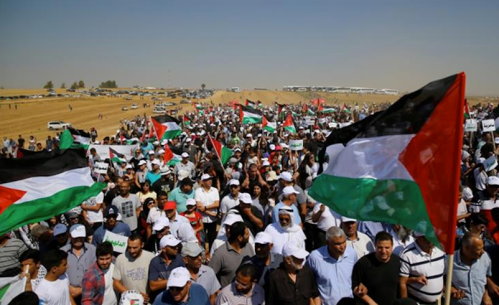 The Legal Basis for the Great March of Return:

The UN Resolution 194 of the third session, issued on 11 December 1948, constitutes the international legal basis for the great return march, especially that it clearly called for the return to be allowed as soon as possible to refugees wishing to return to their homes and live in peace with their neighbors, and compensation should be paid for the property of those who decide not to return to their homes, and for every missing or injured person … “as well as international laws, especially which organize the legal framework for refugee rights, and the universal human rights principles that obligate the international community (States – International Organizations ) to help refugees return to their land and ensure their human dignity. 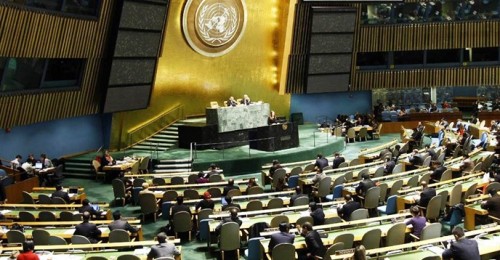 Call for Support and Assistance:

We expect the Israeli occupation forces to use excessive and lethal force against the unarmed participants in the great return march. To avoid casualties, and based on the rights granted to civilians in the occupied territories under the Universal Declaration of Human Rights and the Fourth Geneva Convention of 1949, which the occupation state signed and its Additional Protocol I of 1977, and under the Rome Statute establishing the International Criminal Court, which incorporated certain acts considered to be war crimes, the most important of which were: “deliberately directing attacks against civilians, civilian sites, personnel or facilities for humanitarian assistance functions as well as the deliberate launching of a military attack that may result human and material losses,” we urge you to exert pressure on your governments and force them to:

I’ll be writing more about this very important action as it unfolds. This week, I’m sending a letter to my two U.S. Senators and Congresswoman with a copy of this blog post, making them aware of The Great Return March. I’m also writing a letter to my local paper and will try to tie this action to something local so that they’ll print it.

Bravo to the Coordination Committee.  These future leaders of Palestine give me hope, just as the youth in America give me hope.

4 responses to “The Great Return March”