Today (Feb. 13, 2018) I learned that Israel’s travel restrictions in and out of Gaza through the Erez Border Crossing are well-documented policy, not just my imagination.

The Israeli border agency (COGAT) gloats that hundreds of Gazans enter Israel every day through Erez, but it won’t advertise that in the past year, it squeezed the number of exits by Palestinians down 51% compared to the number who crossed Erez in 2016.

GISHA, the legal center for the freedom of movement, issued a factsheet in January summarizing Israel’s travel restrictions. The entire factsheet makes my blood boil, but the following restriction elicited a silent scream.

MAKING GAZA RESIDENTS TRAVELLING ABROAD SIGN A COMMITMENT NOT TO RETURN FOR A YEAR: In February 2016, the Coordinator of Government Activities in the Territories (COGAT) added a new criterion to the Status of Authorizations, a document which defines the categories of people in Gaza eligible to apply for exit permits. The criteria says that residents of Gaza can travel abroad via Erez and Allenby Bridge crossings on the condition that they sign a waiver stating that they will not request to re-enter Gaza for one year via Israel. In 2017, the practice became all the more absurd as Gaza residents whose exit from Gaza had already been approved for other reasons began to be detained at Erez Crossing until they signed the waiver. The authorities are thus essentially conditioning exit on signing the waiver. Our casework reveals that residents are being made to sign even when they do not intend to stay away one year nor have paperwork to allow them to reside in third countries and that minors were made to sign without guardians’ consent. The practice is a violation of one of the most fundamental rights – to leave and enter one’s place of residence.

But when did any international declaration impact Israel’s decision-making? Answer: Never.

In an act of love and solidarity, the American Friends Service Committee launched #ValentinetoGaza this year, asking friends to post photos of themselves with a Valentine poster for our friends in Gaza. 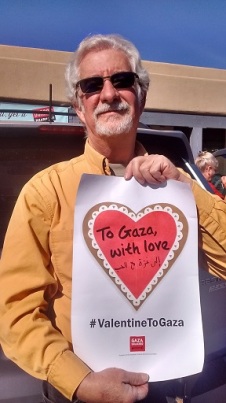 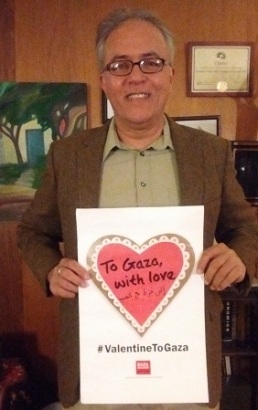 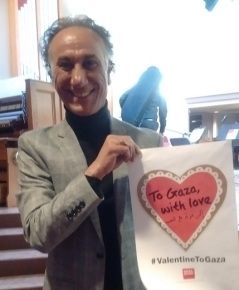 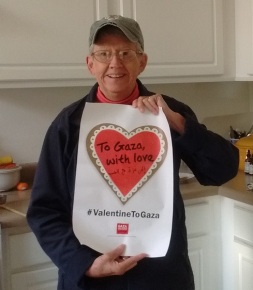 There are so many friends in Gaza I’m thinking of today, wishing I could knock down every barrier, and share a Valentine with you directly. You’re in my heart! 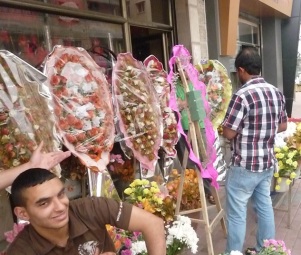 Floral arrangements are ubiquitous in Gaza for weddings and many celebrations

(Lora in Gaza in 2013 – floral arrangements are ubiquitous in Gaza