Farmer’s son cuts some cauliflower and greens for us from his field in Jericho.

A good day to reflect on my week in Jericho because the rain and wind are keeping me inside in Jerusalem.

Jericho is located near the Dead Sea, and many consider it the oldest inhabited city in the world, more than 11,000 years old. An Arab geographer in 985 wrote that the “water of Jericho is considered the highest and the best in all Islam.”

I saw the concrete lined channels carrying the water to the fields and the bounty of date and banana trees, cauliflower and many other vegetables growing under plastic sheeting with drip irrigation. 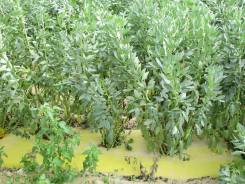 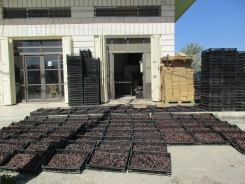 Jericho’s long, long history might be summed up as conquest after conquest. When the Ottoman Empire collapsed at the end of World War I, Jericho came under the rule of the British in Mandatory Palestine.   Then in 1948 Jericho was occupied by Transjordan during the Arab-Israeli war.

The Jericho Conference, organized by King Abdullah and attended by over 2,000 Palestinian delegates in 1948 proclaimed “His Majesty Abdullah as King of all Palestine” and called for “the unification of Palestine and Transjordan as a step toward full Arab unity.” In mid-1950, Jordan formally annexed the West Bank and Jericho residents, like other residents of West Bank localities became Jordanian citizens.[51]

During the Six Day War in 1967, Jericho was occupied by Israel along with the rest of the West Bank. During my visit, I saw very few signs of the presence of Israel or the occupation in Jericho. Jets flying overhead signaled Israel’s presence. I later learned that it was the first city handed over to Palestinian Authority control in accordance with the Oslo Accords.

The limited Palestinian self-rule of Jericho was agreed on in the Gaza–Jericho Agreement of 4 May 1994. Part of the agreement was a “Protocol on Economic Relations”, signed on 29 April 1994.[53] The city is in an enclave of the Jordan Valley that is in Area A of the West Bank, while the surrounding area is designated as being in Area C under full Israeli military control. Four roadblocks encircle the enclave, restricting Jericho’s Palestinian population’s movement through the West Bank.

Israel sent her troops into Jericho during the second intifada and even dug a deep trench around a large portion of the city to control Palestinian traffic in and out of Jericho. I met a man in Jericho who described what it felt like when the Israeli soldiers entered his house, demanding that he come downstairs from his bed where he was recuperating after surgery. Soldiers could re-enter Jericho at any time, and it’s this reality that hangs like an oppressive unseen blanket over the city. 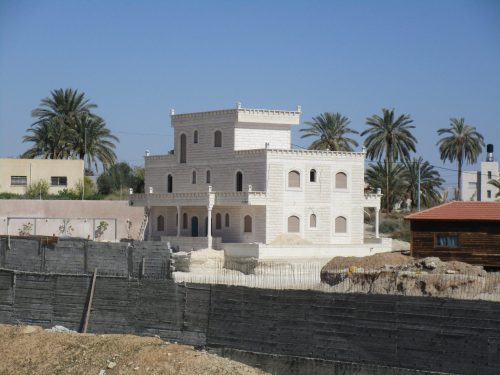 Palestinians from East Jerusalem are purchasing land in Jericho and building homes because they are worried that Israel will force them to leave Jerusalem. Price of land and houses are rising rapidly in Jericho.

In 1994, Israel and the Palestinians signed an economic accord that enabled Palestinians in Jericho to open banks, collect taxes and engage in export and import in preparation for self-rule. In 1998, a $150 million casino-hotel was built in Jericho with the backing of Yasser Arafat.

I never saw the U.S. presence in Jericho but learned later …

Most of my time was spent with family and friends in Jericho, observing the strength of filial bonds, the tradition of sitting and talking over coffee and sweets, and the absolute certainty that Palestine is their land and they will prevail someday. 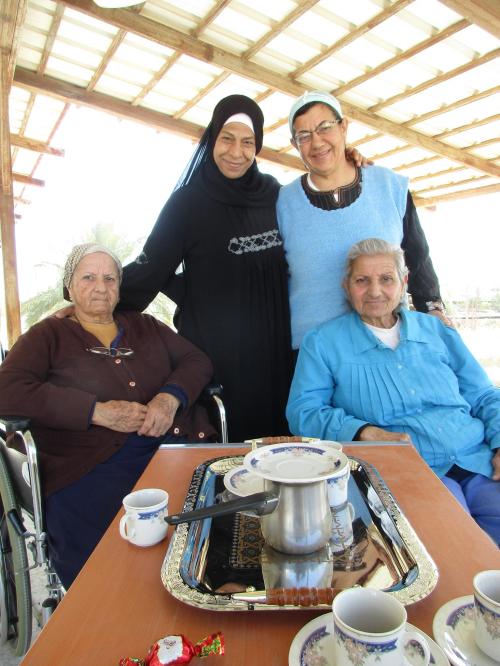 Visiting 3 sisters who are Catholics and have lived together their whole lives in Jericho.

The take-away message for me was one of “patience”.  The Palestinians I met in Jericho (Muslims and Christians) seem to have patience in their DNA.

One man in particular made an impression on me. He was a young (30+ something) caretaker of a small Mosque. He noticed me taking photos of the Mosque and greeted me. He spoke broken English but I learned enough to know that he was a volunteer caretaker and lived on the property with his wife and two young children. He held out his hand to me, palm up, and showed me his fingers. He pointed out the joints in each finger and said: “We are like these joints — the Jews, the Christians and the Muslims. Each connected and working together to make the whole hand work as one.” I interpreted his message as meaning that all of us are connected, as one hand, and we must help each other and live together.

Caretaker of the small Mosque in Jericho showing me his hand.