My journey continues as a pilgrim returning to Gaza. In February 2015 I was in Gilroy, California, USA calling the Egyptian Embassy regularly to see when I might be able to submit my Visa application to cross the Rafah border between Egypt and Gaza.

Day #154 – A question for my Muslim friends wherever you may be in the world.

Please answer “Yes” or “No” or “Don’t know” — and feel free to send me a private message if you don’t want to be identified. Does ISIS represent the true values of Islam?

Day #155 – Warning to my Facebook friends. Don’t accept requests to add people to your “friend list” just because they may be “mutual friends” with me.  I don’t vouch for anyone. I typically add everyone because I’m trying to reach a large audience. I don’t personally know 90% of my FB friends. Just Sayin’

Day #157 – Finished a writing project that’s been hanging over my head. Yeah! Will start a new writing project tomorrow. Thinking about the power of words. I enjoy writing. I’m looking forward to mentoring a new writer from Gaza in the We Are Not Numbers! The organizers have nearly met their fundraising goal!

Day #158 – I have many, many friends from the Middle East. Some I know personally. Talking with them, I know 95% or more do not support ISIS. But I have a friend (perhaps more than one) who does, in fact, support ISIS. My friend is smart and intelligent and only needs a chance to succeed.  Israeli occupation and Western complicity in the occupation are destroying the hopes and dreams of 100s and 1000s of young people.

Day #159 – An independent investigative reporter, Nafeez Ahmed, Ph.D., has just written an excellent piece in the Middle East Eye spelling out why ISIS is attracting recruits, and what we MUST do to defeat ISIS.  This is so good—-I just mailed off copies with a handwritten note to my two US Senators and Congresswoman.  I really do hope they will read it, share it, act on it.

Day #160 – Tonight I watched the new film “Last Days in Vietnam” which will be released on PBS in April. This documentary is about 75-90% original footage from the actual events in 1975 when the Americans left Saigon.  The editing is very well done. And the interviews of people who were there and survived are really remarkable.  Left me thinking — considering where we are in 2015, did the U.S. government and foreign policy wonks learn anything from Vietnam?  The War on Terror is just a reincarnation of the 20-year Vietnam War. Really, nothing has changed except the military industrial complex is more firmly entrenched.

Day #161 – Should I? Or shouldn’t I? Before I post on Facebook, I try to decide whether my post will be constructive and meaningful. Except for the cute animal videos which are easy to post, I sometimes have to stop and seriously think about how my post will be received.

Will it merely inflame passions or will it be food for thought? It doesn’t matter if people agree or disagree with me. Today I’m weighing the pros and cons of posting a message from someone who has drawn thoughtful parallels between ISIS and Zionists.  Should I? Or shouldn’t I?

Day #162 – Hamas is building the facilities at its seaport in Gaza to open it up for trade and travel. I recall university students in Gaza in 2012 who prepared plans for a trade zone at the border with Egypt in Rafah. It’s absolutely amazing that their determination to join the community of nations hasn’t been defeated by Israel’s 8-year siege and blockade and 3 military operations. I’d love to be on the first passenger boat to land at the docks of this new seaport.

Day #163 – “Hamas is a terrorist organization” — I’m so tired of hearing that. Do people actually think if they say it often enough, it will be true?

Hamas is a terrorist organization (“TO”) like the US military is a TO in Iraq and Afghanistan.

Hamas is a TO like Israel’s military is a TO in the occupied Palestinian Territories.

Hamas is a TO like the extremist settlers in the West Bank are a TO to their Palestinian neighbors.

Hamas is a TO like the domestic police squads in the USA that profile young, black males and shoot to kill are TO in their communities.

Hamas is a TO like the multinational corporations that have plundered the indigenous communities in South America killing activists who stood in the way of their profits are TO.

OK … enough already! Stop talking about TO and do something to make the world a little less terrifying for the next generation.

Day #164 – People come to the conflict in the Holy Land with many different beliefs, different “truths” and different understanding. All they need is compassion and everything else will be revealed. I’ve met Jews, Muslims and Christians who are so firmly entrenched in their beliefs, that they view compassion as a weakness.

1) If you take FB comments personally, you’re spending too much time on social media.

2) If you’re feeling depressed, angry, or sad about what you read on FB, you’re spending too much time on social media.

3) If you think you’re changing the world with your FB posts, you’re spending too much time on social media.

Day #166 – Feeling the hate today. Specifically the hatred from readers of The Jerusalem Post who post outrageous comments. I wonder if they feel free to spew such venom because of their anonymity online. Would they dare say such stupid things in person? Has social media contributed to the vitriolic hogwash?

Day #167 – Valentines Day!  I wish every day was Valentines Day! Imagine what the world would look like if people (especially men) had love and compassion in their hearts every day? There wouldn’t be enough room left for the carnage in Gaza and Syria, the murder of 3 UNC students, or the other monstrosities. I wonder if ISIS members receive Valentine cards. 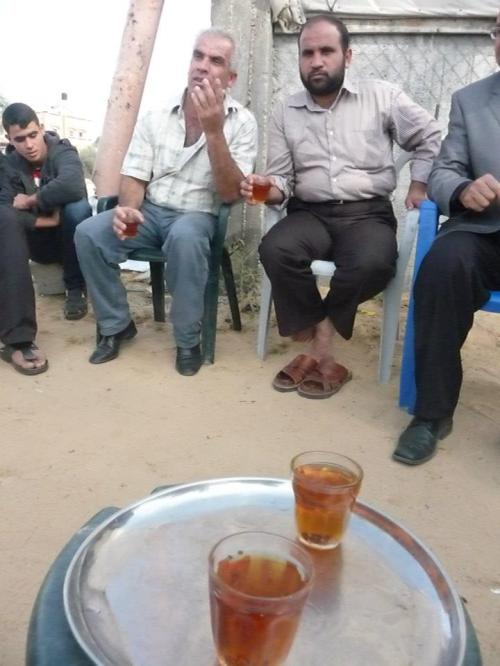 Palestinian whose house was destroyed by Israel the day before offers tea to his neighbors sitting amid the ruins.

Day #168 – “Why do you want to go to Gaza?” another friend asked me last night at dinner. Instead of listing the many reasons I’ve shared with others, I simply told her “I have friends in Gaza and I miss them very much.” That was probably the most honest answer I’ve given to that question.

Day #169 – Thinking about the different groups of people seeking justice in the Holy Land.

ISIS wants justice for Islam and the new caliphate

International Activists want justice for whichever group they are supporting.

Which other groups should be included on this list?

Each group believes it has cornered the market on justice. Can justice for anyone be achieved without compassion?  Compassion seems to be sorely lacking.

Day #170 – A New York Times article today talks about how miserable life is in Gaza that Palestinians would prefer to cross the border and be captured and sent to an Israeli prison than remain in Gaza.

Someone on FB who is clearly “pro-Israel” expressed glee that Israeli prisons are better than Gaza. I intuited that he was proud of Israel for its great prisons.  :-(.  When did “pro-Israel” become synonymous with turning a blind eye to the suffering of your neighbors?

Day #171 – Learning new things keeps the mind and spirit young. Today I learned that I enjoy learning through all of my senses – sight, hearing, touch, taste and smell.  Started listening to an audiobook by Karen Armstrong “Fields of Blood – Religion and the History of Violence”.

Requires a different type of concentration to learn with my ears.

Day #172 – A message to my friend in Gaza who supports ISIS aka Daesh.

Day #173 – I watched the opening of a film tonight celebrating the heyday of the Women’s liberation movement. Title: “She’s beautiful when she’s angry.” I was AWOL during most of the marches and meetings discussed in this film. 1966 – 1971, so this was a real eye opener for me. Wish there was as much energy in the streets today protesting. We need a revolution.

Day #174 – Sharing with friends tonight about how important it is to maintain strong family connections.  I thought about the examples I saw in Gaza and told my friends how families there have such a strong intergenerational bond — something I really admired.

Day #175 – Former Middle East envoy Tony Blair recently visited Gaza. Afterwards he reported that the millions of $$ pledged last September for reconstruction was not coming into Gaza because of disagreements between the Palestinian Authority and Hamas.  No mention that Israel might be withholding $$ or that the donor countries haven’t fulfilled their pledges. Does anyone know what’s REALLY going on?  I want to know.

Day #176 – OK, I don’t know what to make of it, but this is what I’ve been ruminating on today. Karen Armstrong’s new book “Fields of Blood – Religion and the History of Violence” – Chapter 7 focuses on Islam and mentions the Sunni – Shia divide. In earlier chapters, she talks about divides in the other major religions. Present day Palestine and the divide between President Abbas (Palestinian Authority) and Hamas (duly elected in 2005 or 2006). The U.S. Congress and the divide between the Republicans and Democrats, reflecting a serious divide among Americans.

— Each of these divides has been very destructive for the community.

— Each of these divides is spawned from the testosterone side of humanity.

— Each of these divides represents a failure by both sides to heed the “Golden Rule”.  Treat your neighbor as you wish to be treated.

Each case involved American victims of foreign violence; but why the different verdicts? Simple answer: Politics.

Day #178 – I learned a good lesson (again). Not everything posted on social media is accurate. No one is fact-checking. So I posted an article that condemned Israel for intentionally opening a dam and flooding parts of Gaza forcing many families to evacuate their homes. I didn’t fact check it but took it as truth because I saw the same story from different sources. They couldn’t all be wrong?!?  Yes, they were wrong. Friends who consider themselves “pro-Israel” posted messages about the “LIE” as evidence that people “hate Israel”. The original story was fabricated nearly 10 years ago and is repeated every time the area floods. Accuracy is so important and I regret my part in circulating the original post. However, everyone misses the POINT.

Palestinian families are victimized year after year after year with this flooding that is VERY REAL. Friends of Israel want to make themselves out to be the victims of a lie and the inevitable hatred of Israel. We have lost sight of the real victims here. The families who have been flooded out of their homes AGAIN. Ask yourself “why”? Why does this flooding persist year after year? I’m trying to find the answer and will share it when I have the facts.

Day #179 – “Theological bigotry.” Karen Armstrong uses that term in “Fields of Blood”. For thousands of years, mankind has savagely murdered “others” in the name of their religion — Christians, Jews and Muslims have all claimed their religion allowed them to slay the “other.”

Day #180 – Realized tonight that I have no idea how I might feel if I was a Muslim listening to Daesh (aka ISIS) explain why they are destroying enturies-old statues. 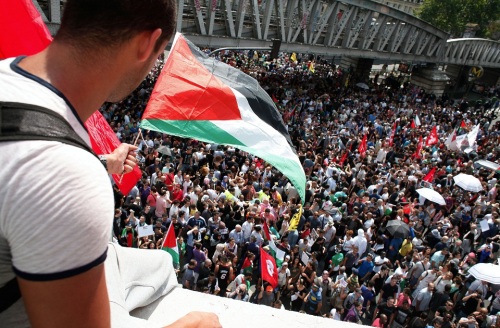