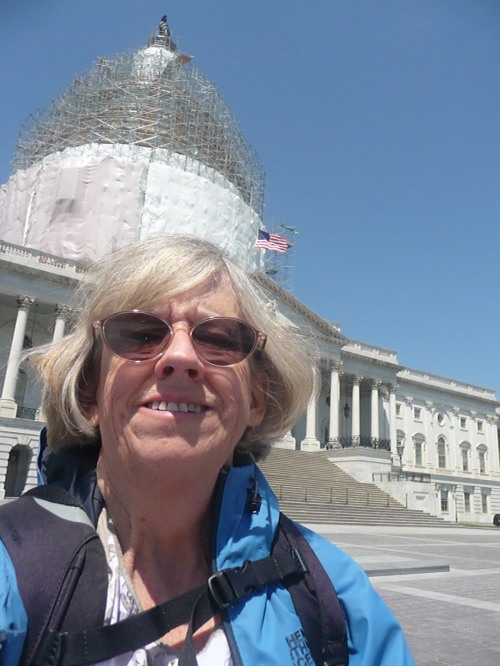 Lora squinting in front of the US Capitol

Today I visited Washington, DC where the Capitol Building is getting a facelift. My goal was to connect with staff in each of the offices of the New Mexico delegation to talk about al-Nakba.  It went something like this . . .

Staffer: Welcome to the office. We always like to hear from our constituents.

Lora: Thank you for taking time to meet with me. I have a personal interest in the Middle East (and I proceeded to share a bit about my background to set some context).  Have you heard of al-Nakba?

Lora: Maybe you know about Israel’s Independence Day which was celebrated yesterday.

Lora: When the Zionists declared the new State of Israel in 1948,  they began to forcibly expel over 750,000 indigenous Palestinians from their homes, businesses, and land. Many were killed. Over 500 Palestinians villages were destroyed. That expulsion is referred to as al-Nakba or “Catastrophe” in English, which continues to this day.

Lora: What does the Senator / Congresswoman think about Israel & Palestine?

Staffer: Well, Israel has a right to defend herself, but we think Israel’s bombing of schools and hospitals last summer was over the top.

Lora: The situation in the Gaza Strip is dire. More than 2,000 Palestinians (most of them civilians) were killed last summer. Thousands of homes were destroyed and hundreds of families remain without shelter today. The status quo cannot continue. In fact, the U.N. issued a report in the summer of 2012 that said the Gaza Strip would be unlivable by 2020!

Staffer: Yes, but the situation is complex. What do you think the Senator / Congresswoman should do?

Lora: You know that the official U.S. policy regarding Israel/Palestine has been consistent for decades and under the Administrations of both parties. Carrots haven’t worked, it’s time to use sticks. Expressions of “concerns” about Israel’s settlement expansion in the occupied Palestinian territories (a violation of international law) have not resulted in any change.

Staffer: What kind of sticks?

Lora: Such as reducing the $3+ Billion/year the U.S. taxpayers give to Israel;  supporting the Boycott, Divestment and Sanctions (BDS) movement; and refusing to shield Israel from criticism at the United Nations.

Lora: <exacerbated but remaining calm> You know, like what we did with South Africa to help end the apartheid regime? And since Congress heard Netanyahu speak in March, maybe an invitation  to Ambassador Riyad Mansour, Palestine’s permanent observer to the U.N., and former President Jimmy Carter, to speak to Congress would be helpful. Shouldn’t Congress hear from both sides?

Staffer: When an important vote comes up, the Senator / Congresswoman always asks staff “who have we heard from in the District about this issue and what did they say?”

Which leads me to the point of this blog post. Don’t take it for granted that your members of Congress understand the issues in the Middle East. Reach out to them, call or write, and tell them what you think. Although the AIPAC and J Street lobbyists are known to Congressional staffers, other groups (Jewish Voices for Peace) and individuals may be unknown. We need to be heard in Congress. It’s easy (check out this website) and there’s no excuse not to.

My hunch is that not a single member of Congress has heard of al-Nakba. I know the staffers of the New Mexico delegation hadn’t.